Our Tower Defense game is slowly turning into a real game, but there is still a lot of work to do. For example, most games are about winning, and therefore about losing. In this part of the tutorial I’m going to work on losing the game. For now, winning will remain a promise :)

The result of this part can be seen here; you can also find it on StencylForge under the name “Publysher – TD Tutorial #9”.

Until now, we have only created Actor Behaviors. However, the number of lives of the player is not related to a specific actor but to the current level. So, this time I will create our first custom Scene Behavior.

Tip: there are no rules for choosing between Actor behaviors and Scene behaviors – use your gut feeling, and don’t be afraid to change it later on. You will get better at it over time.

But first some preparations. I started out by copying the Score Font to a new font called Lives Font and changed the colors to white and red. I also created an actor called “Number of Lives”, used this heart from iconfinder.com as its default animation and made it a member of the group “Visual Effects”.

Now it is time to create a new Design Mode Scene Behavior called “Number of Lives Manager”. It will work like this:

So, we will need a few attributes: 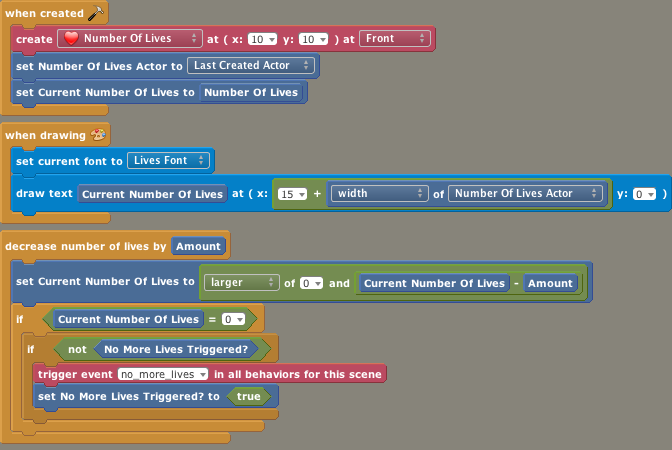 Attach this behavior to the Test Scene, set the Number of Lives attribute to 10 and play-test your game. 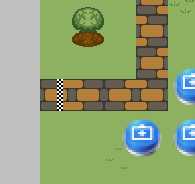 The first step is to determine the correct collision shape for our actor. Open the Finish Line actor and go to the Collision tab. Remove the default collision shape by selecting the default box and pressing the Delete button. Then, using the “Add Box” button, add a box such that it is exactly as large as the finish line: 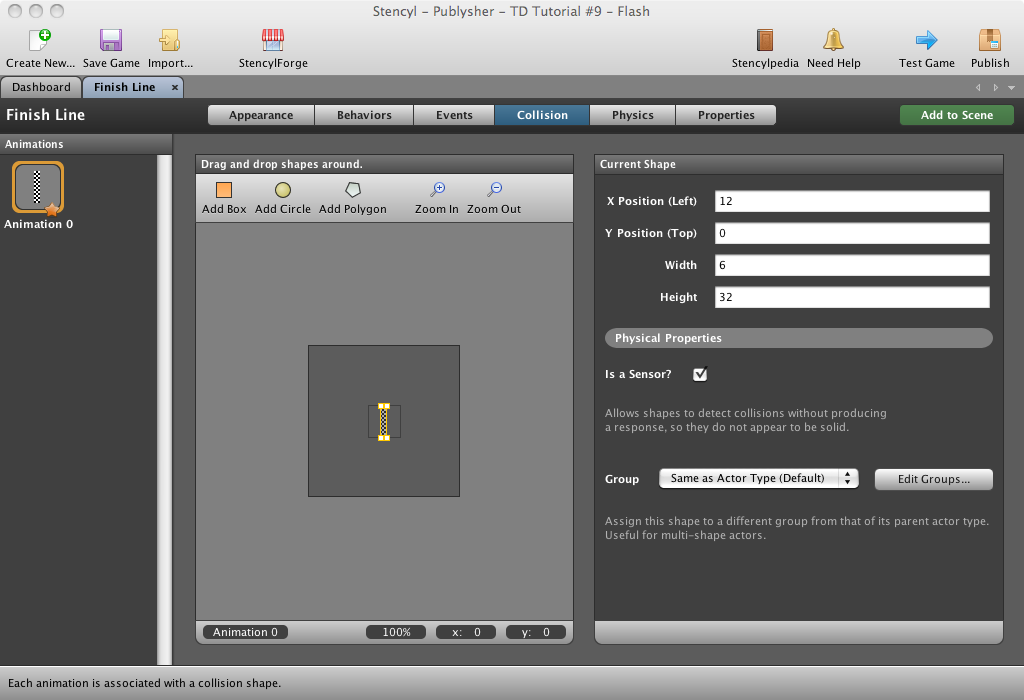 Now we don’t want our enemies to bump into the finish line – we merely want to detect when an enemy crosses the line. So make sure you tick the box “Is a Sensor?” on the right-hand side.

The last step is to make sure our Finish Line collision group is set to collide with our enemies. 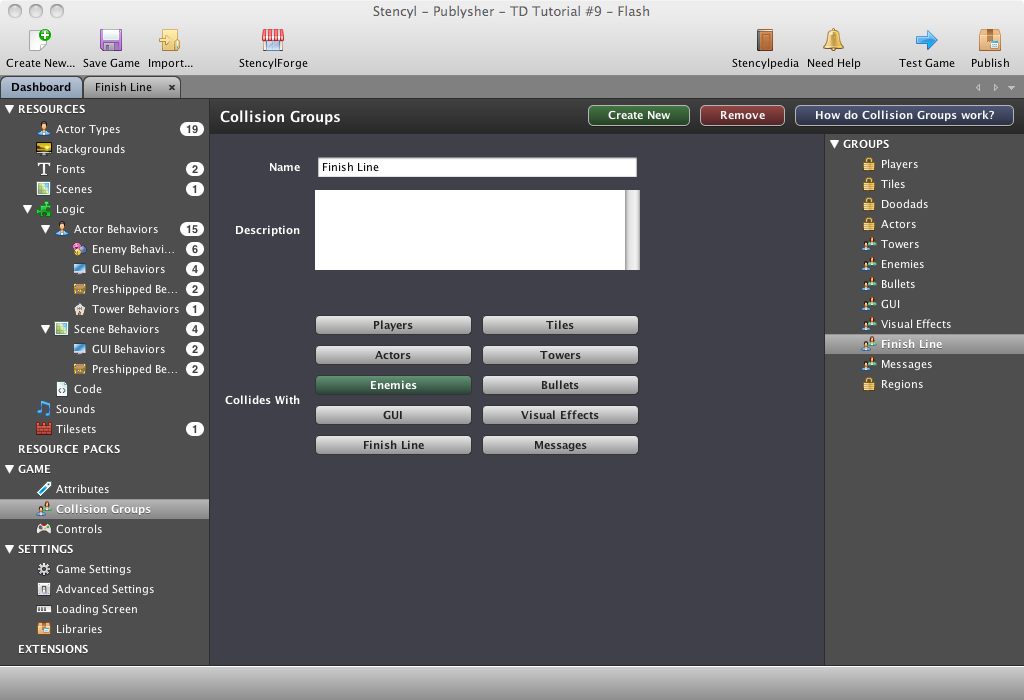 Play the Test Scene again and notice how the new finish line does not seem to have any effect. However, under the hood a lot is happening.

This implies the following attributes:

and the following code: 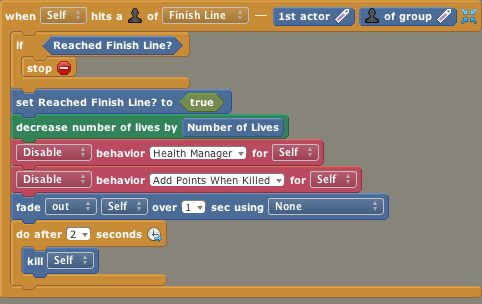 Add this behavior to every enemy, play the game and behold! Enemies crossing the line will now decrease the current number of lives.

I started out by using my favorite graphics program to create a big You Lost graphic. I then created an actor called “You Lost Message”, and put it in a new collision group called “Messages”.

The next step was to create a new Design Mode Actor Behavior called “Message” and attach it to the “You Lost Message”. For now, this behavior consists of a “When Created” block and a custom block called “Show message”: 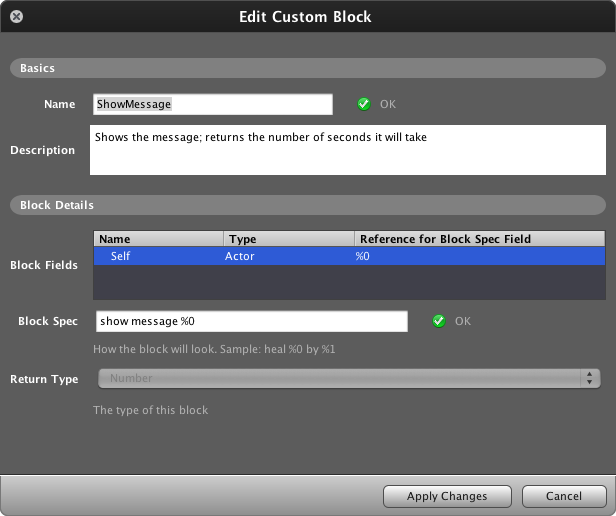 Did you notice anything special? The “show message” block returns the number of seconds it will take to actually show the message. This is a small trick to ensure that other behaviors can wait exactly as long as needed for the animation to complete.

Everything comes together in the final behavior, a Design Mode Scene Behavior called “Player Dies”. This behavior has one custom event block: “when [no_more_lives] happened” which: 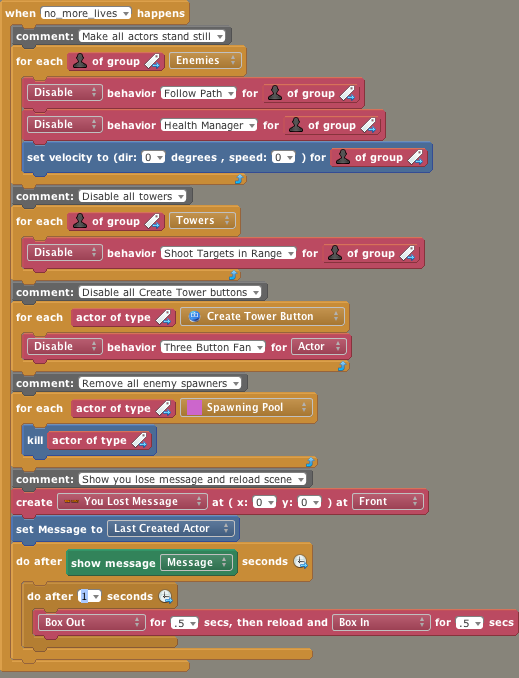 This behavior was attached to the Test Scene, and playtesting shows the desired result.

The “Spawn Enemies” block which was introduced in part 6 now looks like this: 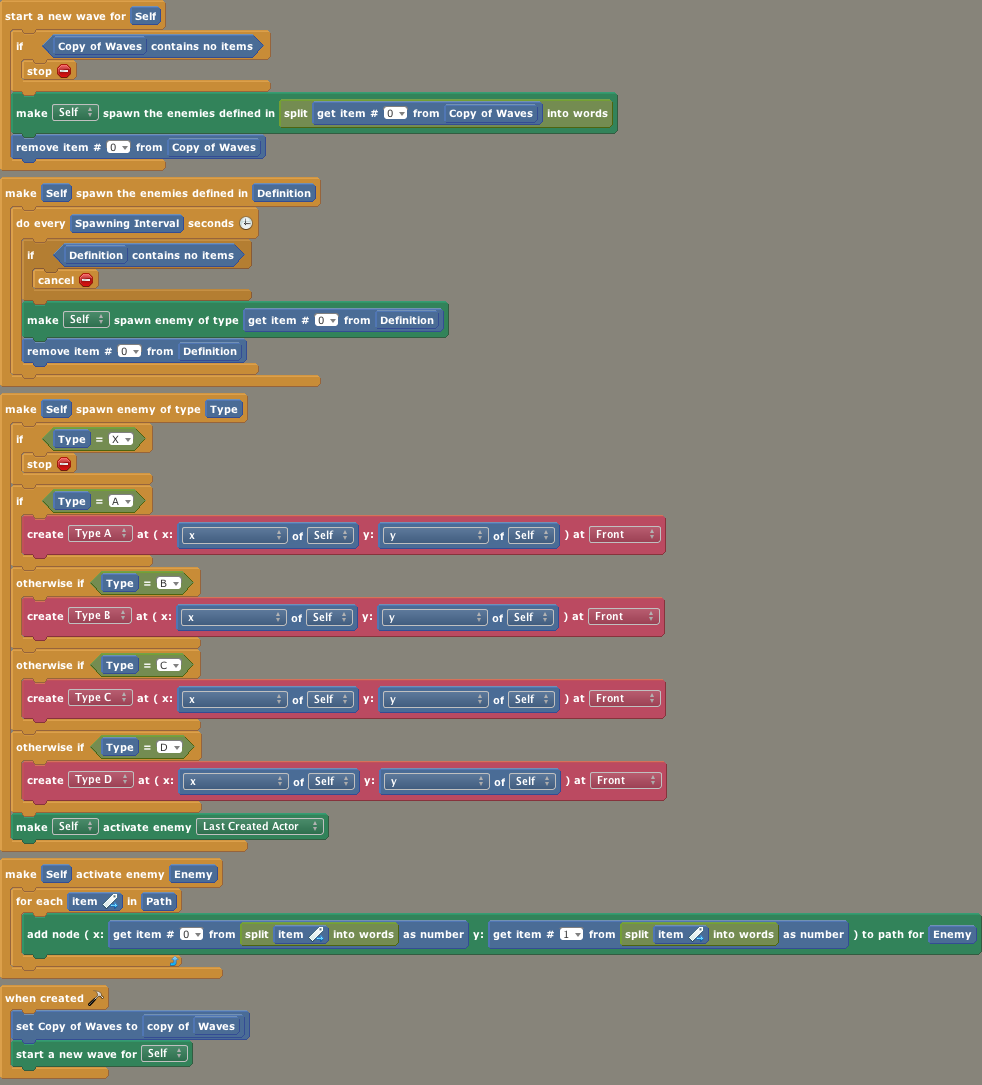 Tip: bugs happen, and usually in your own code. But sometimes it is a problem in the framework. In those cases, do not despair and try to find a workaround.

The final result can be seen here, and the game can be downloaded from StencylForge under the name “Publysher – TD Tutorial #9”.

Now continue with the next part where the player gets the opportunity to win.