In the previous posts, I created a very basic Tower Defense Game with wandering enemies and pre-placed towers that can kill enemies. In most TD games, enemies are not killed outright but damaged. In this part, I will introduce the pre-shipped Health Manager and use it to make the towers deal damage.

I will also create a new behavior to show visual feedback on damage. This will include the concept of “Run later” blocks which can be very very tricky.

The result can be seen here; you can also download it from StencylForge under the name “Publysher - TD Tutorial #3”.

A Bit of Theory

In all TD games that I know of, every time a tower hits an enemy it deals a certain amount of damage. This amount has a lower and an upper bound, and the exact amount is usually determined at random. The bounds are usually determined by the level of your tower.

At the same time, most TD games give some kind of visual feedback to indicate the current amount of hitpoints each enemy has. This is usually indicated by a green bar that is proportional to the health of the enemy.

Triggers are the most easy: you send a message to one or more actors, and if one or more behaviors on those actors happen to listen to that kind of message (using Custom Event blocks), they react. If they don’t listen, nothing happens.

Tip: for communication, prefer triggers whenever possible. Only if you really need to send extra data with your messages, use Custom Blocks.

Time to do stuff. The first thing we are going to do, is to add the pre-shipped Health Manager behavior to our enemy actor: 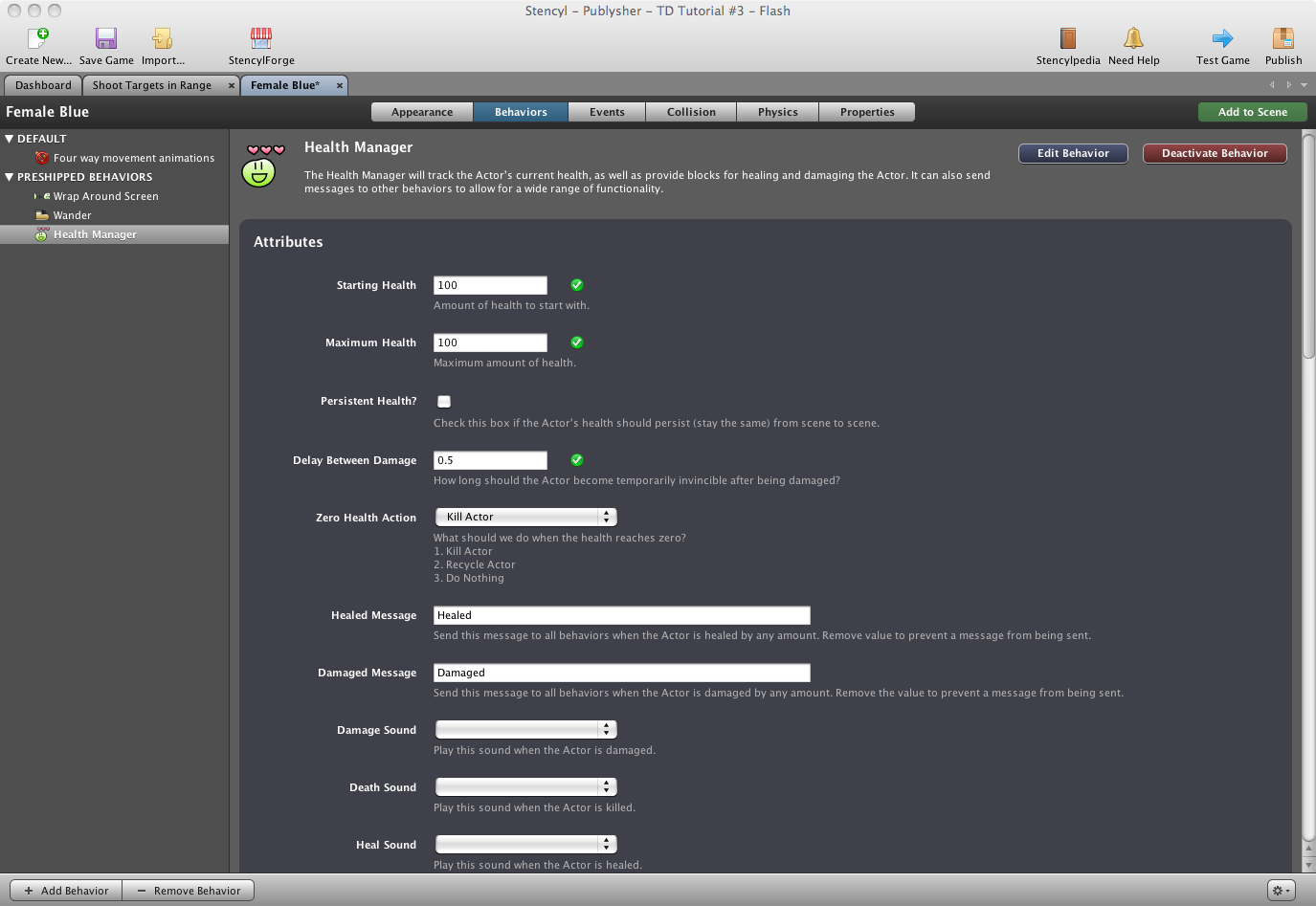 Leave the other attributes as is, and press “Test Game”. Wow. Each enemy now has a nice health bar over her head. Sure, they are still killed immediately when nearing a tower, but already it looks much better.

Now that our enemies have a concept of health, it is time to deal some damage. To do this, we are going to modify the “Kill Targets in Range” behavior. For starters, go to the Properties tab and rename the behavior to “Shoot Targets in Range”.

Now, we are going to introduce the concept of “shooting”. We could integrate this into our existing “Enemy enters region” event, but good computer programming practices suggest that a new concept requires its own block. Click “Add Event” and choose “Advanced”, “Custom Block”. Then, press the Create Custom Block button and create one as follows: 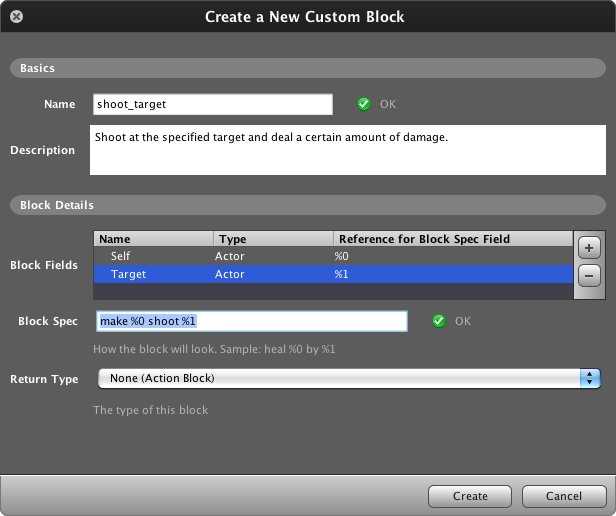 Then, create two new Number attributes called Minimum Damage and Maximum Damage, and make sure your behavior works like this:

The “make [self] shoot [the actor]” block can be found on the palette under “Custom”. If not, close the behavior and open it again. Custom blocks sometimes don’t appear immediately.

The “Damage [actor] by [number]” block can also be found under the “Custom” tab. This custom block was not created by me; instead, it is provided by the Health Manager. Did I mention the Health Manager behavior is really cool? This is an example of two actors communicating with each other through Custom Blocks.

If you look at the current version of “Shoot Targets in Range”, you might wonder why on earth I want a separate custom block called “Shoot Target”. I could just as easily have done without it.

Tip: whenever you create a new concept in your behavior, create a Custom Block or Custom Event. This will ensure you can keep understanding your behaviors, even if they get more complicated.

And that’s it! Press the “Test Game” button once more and see how the enemies are no longer killed outright.

In the Blink of an Eye

One thing that’s annoying in our current game is that you can easily miss an enemy being damaged. That’s a shame, because a lot of fun is in the killing. We need more visual feedback on each hit.

While you might be inclined to Mortal Kombat-styled gore and splatter effects, the pixel art used in this tutorial calls for a tried and proven technique: flickering. Flickering is a subtle effect that nevertheless catches the eye. And it’s not pre-shipped.

This calls for new behavior. Let’s get back to thinking mode. Whenever our actor is damaged, we want the actor’s sprite to disappear and reappear a few times. But how do we know when our actor has been damaged?

Let’s continue thinking: how much time should there be between hiding and showing the sprite? How often should we repeat this? What is the actual value of this “Damaged Message” attribute in the Health Manager? We don’t know.

and look at the result: 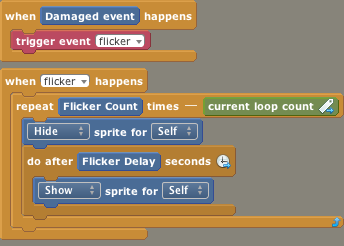 Now attach this behavior to our enemy, press “Test Game” and be prepared for a small disappointment: our enemies flicker, but they flicker only once!

It’s All About… Timing

So, what’s happening here? The problem is that when a behavior executes, the “Do after [N] seconds…” block only schedules future action – the behavior does not wait for those future actions but instead starts repeating immediately. What actually happens is this:

And this is exactly the behavior we observed. 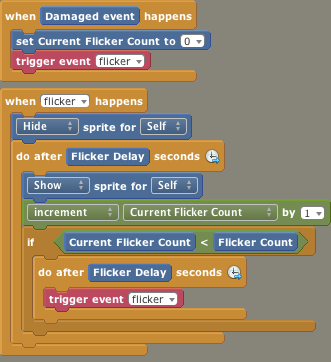 Here we use the Current Flicker Count attribute to keep track of the number of flickers so far. The greatest surprise is at the end: when we haven’t reached our goal, we trigger “Flicker” from within the “Flicker” event block. This was only possible because I listened to my own tips and created a new Custom Event.

The final result can be played here and the game can be downloaded from StencylForge under the name “Publysher - TD Tutorial #3”.

In part four of this tutorial I will make shooting at enemies more appealing.