Stencil tutorial 10:
Do the wave

Last week I talked explained how to lose. This week, I’ll talk about winning. After a short introduction on what it means to win a Tower Defense level, the tutorial will explain how to have multiple waves and how to recognize that the player has won.

The result of this part can be seen here; you can also find it on StencylForge under the name “Publysher – TD Tutorial part #10”.

Winning: What does it mean?

In a typical tower defense game you win the level when you have survived all waves; in other words: when all waves have passed and you have at least one life left.

This of course begs the question: what does it mean for a wave to have passed? In our current game, a wave has passed when every enemy that has been spawned by this wave has left the screen – either by being killed or by passing the finish line.

So in order to implement winning in our Tower Defense game, we need to do the following:

For now, the feedback will consist of a happy “You Won” message, after which the level will start again.

A closely related aspect is the concept of multiple waves. Right now, our Tower Defense game supports only one single wave – however, once a wave has been exhausted a new wave ought to arrive. This new wave should start after a predetermined time, and the player should have the possibility to call it early.

In order to have a game with multiple waves, we need the following:

Let’s start with showing the number of waves. Each Tower defense game has its own method of doing this, but for this game we’ll keep it simple: just an icon with two numbers: the current wave and the total number of waves. If this sounds familiar, it should be – it is going to be very similar to the Number of Lives Manager and the Score Manager. When a wave is exhausted, a button will show up somewhere on the screen. Clicking this button will cause the next wave to appear; if a certain amount of time has elapsed and the player hasn’t clicked the button, the next wave will appear anyway.

In order to implement this, I will create a few actors, two new behaviors and I will extend a number of existing behaviors. The diagram below gives an overview of the various new and modified components:

Quite a complicated diagram, isn’t it? By the way, this kind of drawing is called an UML diagram, and it is a great way to visualize the different components in your game and to track the interactions between them.

To read a diagram like this, start at the top where I have drawn the our Test Level. For this part of the tutorial, there are two relevant behaviors attached called “Player Wins” and “Number of Waves Manager”. The latter behavior communicates with three different actors, called “Spawning Pool” (remember that one?), “Number of Waves” and “Next Wave Button”, and it uses a new Font for the drawing called “Waves Font”.

The “Spawning Pool” actor still has to the “Spawn Enemies” behavior I’ve introduced in an earlier post. The “Next Wave Button” actor has a “Button Feedback” behavior. The “Number of Waves” actor has no behaviors at all.

As you can see, this diagram does not visualize the entire tower defense game. Part of the trick in creating such diagrams is omitting everything you don’t need.

Tip: making diagrams such as these really helps in getting a grip on your own game.

The previous picture makes it easy to start setting up a number of new actors:

And of course, because I will need them later on:

You can attach these behaviors to the test scene; their contents will be explained in the remainder of this tutorial.

If you haven’t done so already, now is a good time to add some extra waves to your Enemy Spawners – this will make testing so much easier later on.

It’s time to do some thinking again. As I pointed out above, we will need some information to decide if we have won. Let’s start with some definitions:

Based on these definitions, we can now determine if a wave has passed:

This does mean that we will need to know if a spawner is active or not. Let’s make sure this happens.

The first thing I’m going to do is to change the enemy spawner. Remember how we added a “start next wave” call in the “on created” event? Let’s remove that. 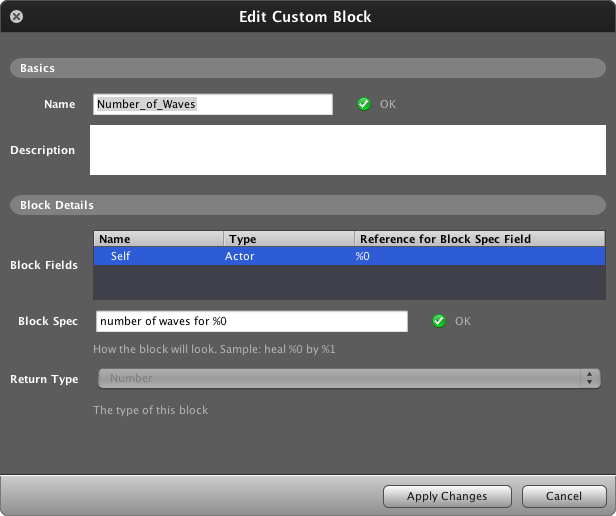 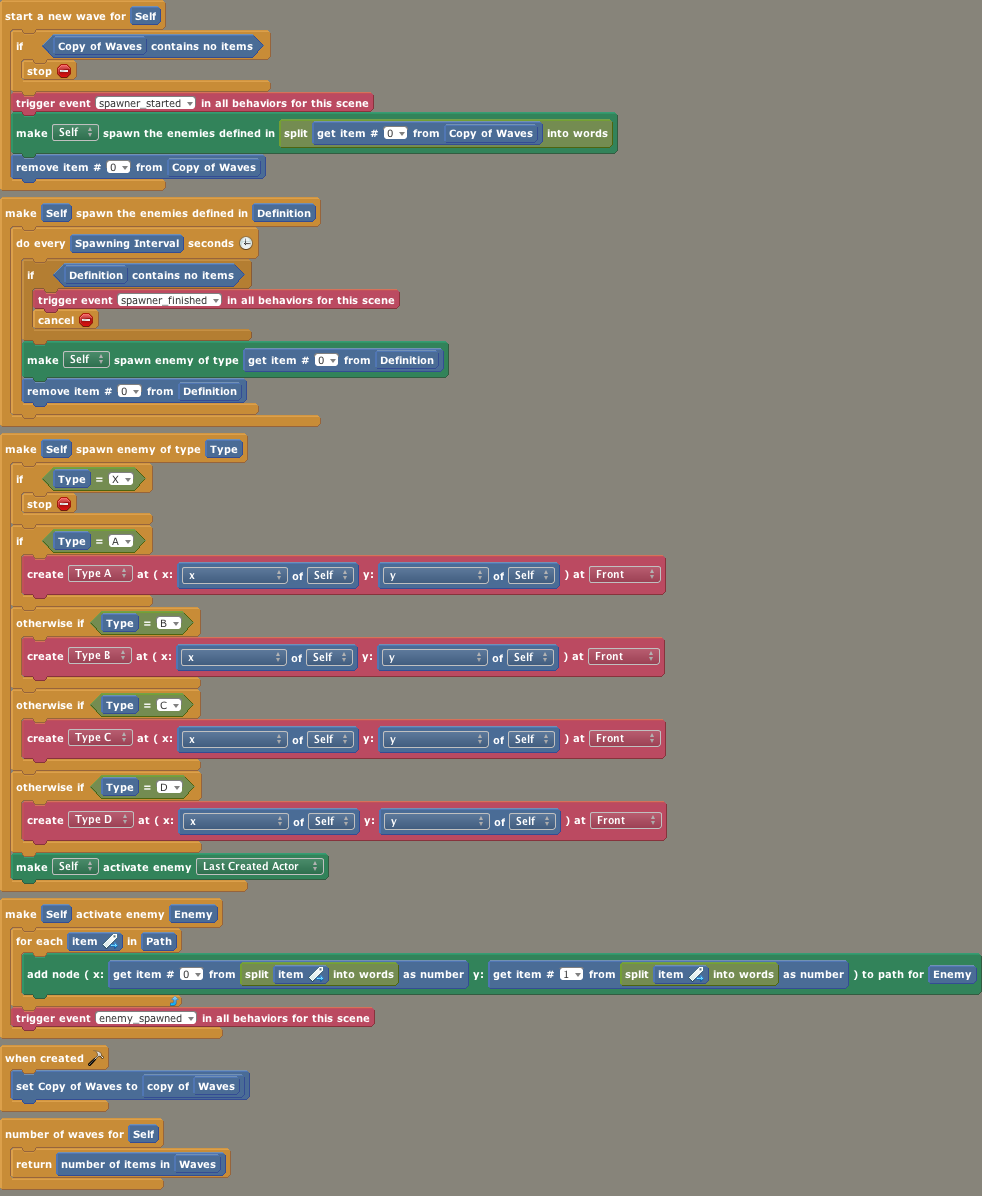 And now everything is in place for our coup-de-grace: the Number of Waves Manager. This behavior has a number of responsibilities:

How are we going to do this?

We know how many waves there will be in total by asking all the enemy spawners how many waves they have. The largest of those numbers is the total number of waves. We will remember this in a hidden Number attribute called “Max Waves”.

We can keep track of the current wave by using a hidden Number attribute called “Number of Waves”. This number will initially be 0, and it will be increased whenever a new wave starts.

These attributes can then be used in a “when drawing” event to draw the numbers on the screen.

If a spawner has finished, and the resulting number of active spawners is zero, it is time to show the “Next Wave” button. This button is stored in a hidden Actor attribute called “Go Button”. The button is created and hidden in a “When Creating” event, and it is shown here.

Using a Mouse Click event, we can determine if the user clicked on the “Next Wave” button. If this happens, we call the “Start next wave” event on our enemy spawners, and hide the button again.

Combining all of this, we get the following behavior:

The “no more enemies” event is captured by the “Player Wins” behavior. This behavior just makes sure that all the towers are disabled; it then shows the You Won message and, for now, reloads the game.

If you’re feeling adventurous, you can create new levels for your game and make sure the next level is loaded when the player has won.

In this part of the tutorial, I have:

The final result can be seen here, and the game can be downloaded from StencylForge under the name “Publysher – TD Tutorial #10”.

This is the end of my tutorial. My blog is filled with interesting other technologies, but I will no longer be writing about Stencyl game development. Of course, this does not mean that it is the end for your game!

By following this tutorial you have created a solid basis to experiment further on. Whenever you get stuck, don’t hesitate to ask around in the Stencyl Forums – they are filled with friendly people who are more than willing to help you.

If you have created an interesting tower defense game based on this tutorial, let me know and I will give it special attention in this blog.