So far my towers have been shooting at enemies with invisible death rays. This is of course state-of-the-art weaponry, but most players prefer a bit of feedback.

In this part, I will replace the invisible death rays by animated bullets. Along the way, you might learn a bit about basic game mathematics.

The result can be seen here; you can also download it from StencylForge under the name “Publysher – TD Tutorial #4”.

Bullets – How Do They Work?

In real life, shooting at enemies works a bit like this:

This looks like a great translation, but look at number 6: towers missing their mark is not very usual in TD games. Furthermore, step 2 is more complicated than it looks, especially with our wandering actors. And finally, using collision detection for bullets might be a bit of overkill, given the fact that we will have a lot of bullets flying around.

So, to make my life easier and the shooting more TD like, I will use the following algorithm:

There, I just got rid of predicting positions and collision detection. In most cases, bullets will still travel to their target in an almost straight line; sometimes the bullet will swerve a little, but that might actually make for a nice visual effect.

Tip: Only look at real life to see how something should look, not how it should work. In games, approximating real life is often better than emulating real life.

A Bit of Math

Step 3 of the algorithm defined above still contains a bit of trickery: the bullet continually updates its direction. But how to do that? The answer lies in mathematics, trigonometry to be exactly. I will not go too much into the details, there are plenty of online resources for that, but have a look at the following diagram: 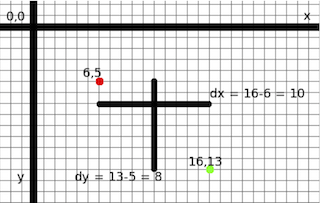 For example, if we’d want to find out the exact distance between the red dot and the green dot, we’d use the Theorem of Pythagoras and calculate the distance as the square root of (dx * dx + dy * dy).

Another example would be the angle of the straight line between the red dot and the green dot. Without going into details, this would be calculated as atan2(x, y), which would give us the angle in radians. If you want to know why, read this article on Wikipedia.

Tip: Every 2D game programmer should at least learn the concepts described above.

Start by importing this resource. This will create a new actor called “Bullet”. Create a new collision group called “Bullets” and make sure your new actor is a member of this group. If you’ve forgotten how to do this, please read Part 2 of this tutorial again.

The next step is to create a new Design mode Actor behavior called “Flying Bullet”. This behavior will contain the logic to follow our target and deal damage once the bullet reaches it. Remembering the tips from part 3, let’s start by creating a new custom block for this action: make [self] shoot [target actor] and deal [amount] damage. 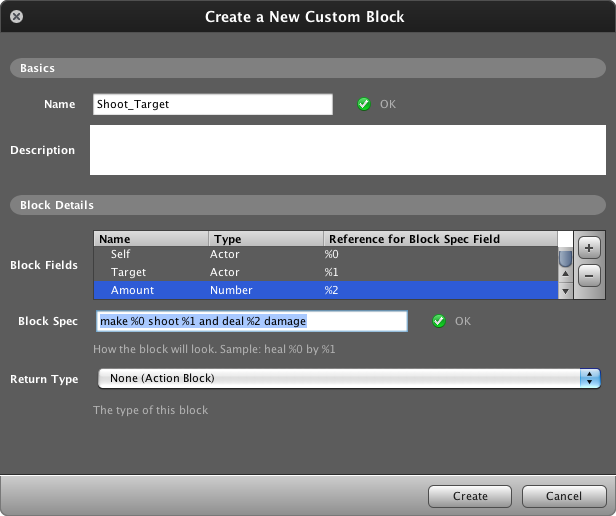 So, how to implement this? One big hint was the phrase “continually updating its direction”. Whenever you hear yourself say “continually”, rest assured that you will need a “When updating” event.

Tip: Always tell yourself what you want your program to do. After a while, you will notice how certain keywords in your explanation point you in the right direction.

The “When updating” event is a lot more interesting. Essentially, at each update we calculate our angle using the atan(dy, dx) technique described above and use the “set velocity to [dir] degrees, speed [speed]”. Before we do that, we check if our position is equal to the position of our target. If so, we apply the damage and kill ourselves.

If you look at the behavior, you can see that I did not tell the entire story. Some highlights:

At this point, we’re nearly there. All that remains is to change the “Shoot Targets in Range” behavior to actually fire the bullet: 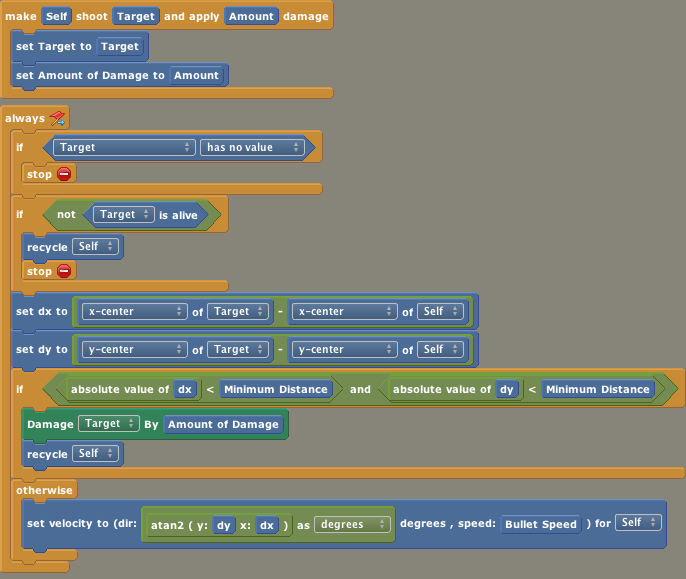 Luckily, I had already created a separate “Shoot Target” block, so it was easy to find out where I had to change my code.

After this change, it’s time for some play testing! As you can see, the towers now fires actual bullets; when the target moves too fast, the bullet corrects its course and it always hits.

This is a nice moment to play around with the values in our behaviors. For example, I’ve set the “Bullet Speed” in the “Flying Bullet” behavior to 15. Try setting it to 7 and see how some bullets never reach their target. Try setting to 150 and notice how you can hardly see the bullets anymore. Choosing the right values is a matter of taste and practice.

If you test the game long enough, you might spot some weird behavior: our enemies have a Wrap around Screen behavior, and whenever they do that, the bullets take an unnatural turn. Given that our enemies will not remain stupid wandering sods forever, this is perfectly acceptable for now.

The final result can be seen here and the game can be downloaded from StencylForge under the name “Publysher - TD Tutorial #4”.

In the next part of this tutorial I will improve the actual targeting of enemies.